What Causes Variegation in Houseplants? 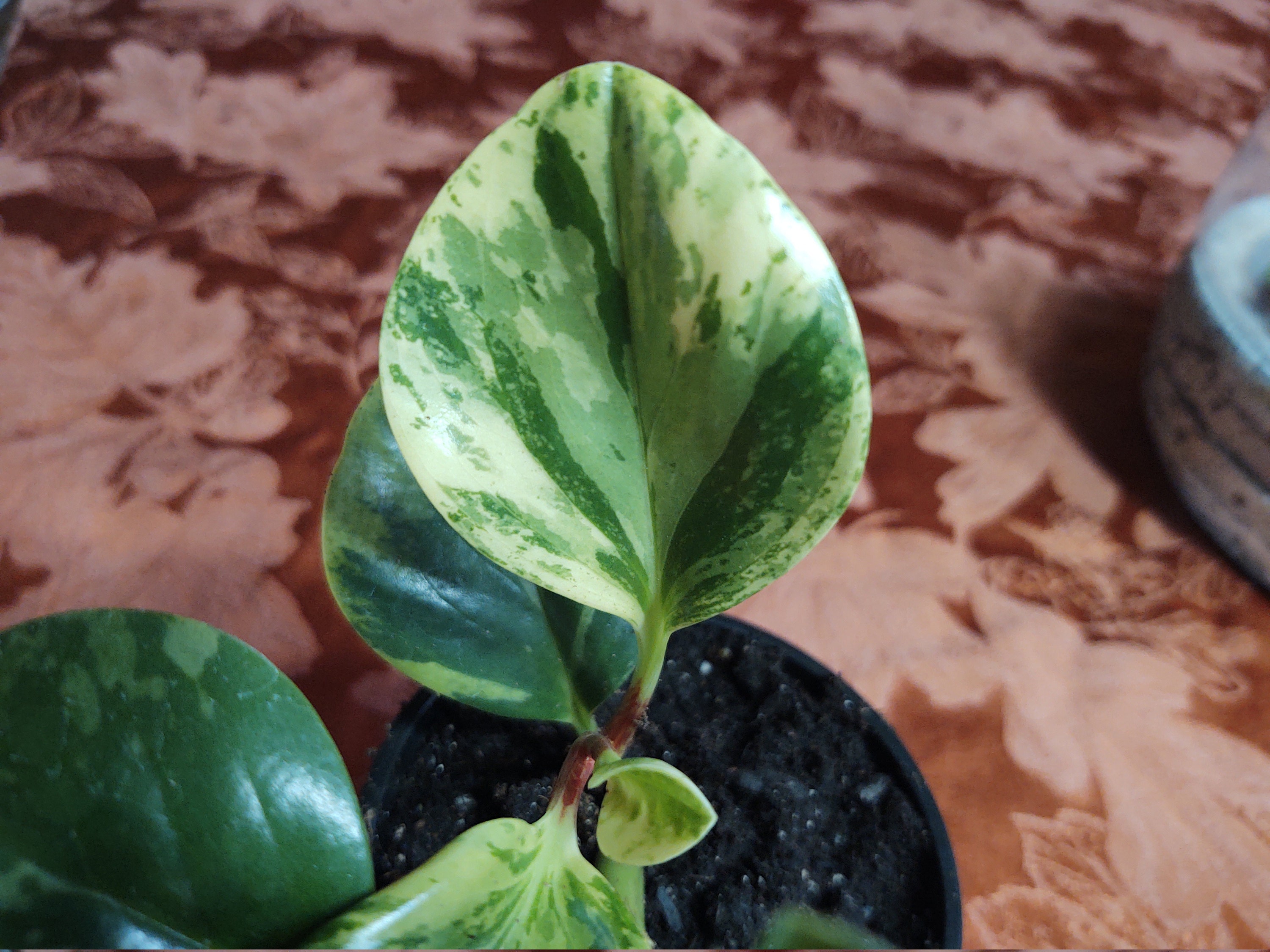 In terms of plants, variegation is the presence of two or more colors on a leaf or flower. Depending upon the type or cause of the variegation, these color patterns may or may not be carried to propagated offspring from the parent or source plant or may be transferred only through certain types of propagation. Examples of commonly found variegated houseplants are Coleus, Zebra Grass, Marble Pothos, Calathea, Philodendron brasil, and many, many others. Plants may even gain or lose variegation as we’ll explain as we get into the details of what causes variegation.

Some plants are genetically predisposed to specific color variegations. These plants, like Coleus or Caladium, carry the trait of variegation in their core genetic code and pass this on to their offspring regardless of the method of propagation. Offspring created by leaf-cuttings, stem cuttings, seed germination, bulbs, or other methods will carry the same type of variegation as the parent plant (unless a new mutation takes place).

In some cases, a plant that is not normally variegated may become variegated upon infection of pathogens such as a particular type of virus. An example of this type of variegation can be seen in the flowers of Christmas Cactus plants which are infected with a ‘Streaking Virus.’ Plants that previously had flowers of a single solid color may begin showing white streaks on the flower petals. These streaks will typically increase in size and prevalence with successive flowering cycles until the flowers are almost completely washed out and colorless. This ‘streaking virus’ can be spread among plants by insects or people trimming an infected plant and then using the same tools on another plant. In this way, an entire collection may become infected over time. Diseased plants should not be propagated, sold or given away due to the likelihood of spreading the disease. The virus is general present though out the tissues of the plant and is almost certain to be present in propagated offspring. It may be more or less visible depending upon the overall health of the plant and the amount of viral load.

Some plants may have a type of gene called a transposon or jumping gene. Transposons may change locations within chromosomes from cell to cell causing different color expressions based on their location. An example of this is multi-colored Indian Corn which may have kernels of various shades of red, yellow, orange or other colors all on a single ear of corn. This type of variegation can also be found in the leaves and flowers of some houseplants, often causing an irregular pattern of color ‘splashes’. This type of variegation is also part of the inherited genetic code of the plant and will generally be carried through to offspring regardless of the method of propagation -except tissue culture or other methods that may affect transposon excision rates, but that’s an advanced topic for another day (1). The African Violet cultivar ‘Thamires’ which has pink petals with splashes of blue on the petals is an example of ‘Jumping’ or transposon variegation.

Finally, we come to Chimera type variegations. This common type of variegation comes from mutations that occur in the cells of the meristem. The meristem, for this purpose, is the growing tip of branch or stem. The cells here are composed of three layers which are designated as LI, LII, and LIII. As the plant grows, the LI layer becomes the epidermis or outer layer of leaves, stems, and branches. Under that is the LII layer, and below the LII is the LIII layer which comprises the main body and vascular tissue of the plant. A chimeral variegation mutation is one in which one or more of these layers has a mutation that causes the affected cells to lose the ability to produce chlorophyll which ordinarily gives the plant its green color. Mutated cells in the meristem, therefore, create a white or yellow color that we typically associate with variegation. Note that it is possible for meristem cells to mutate in other ways or even produce different colors, but the lack of chlorophyll mutation is fairly common in a variety of houseplants so that’s what we’re discussing here. Because Chimera type variegation is caused by a localized mutation in the meristem, it does not get carried through to seeds or by leaf cuttings. It needs to have part of the original meristem containing the mutation.

Chimeral Variegation Can Change or Vanish Over Time

If you have a plant that has a chimera-type variegation, you may notice it changing over time either increasing or decreasing the amount of non-green surface on new growth. Sometimes it disappears altogether leaving new growth completely green. Conversely, it may increase and cause new growth to be completely white and lacking chlorophyll. If all the cells in one of the layers are mutated, then we expect the variegation to be quite stable and to repeat in all new growth from the originally affected branch. This is called a periclinal chimera. If only a portion of the cells in one or more layers are affected, it is called a mericlinal chimera, and we expect the variegation to be unstable. If a portion of all three layers is mutated then it is called a sectorial chimera, and again we expect instability of the pattern.

One of the most common types of stable chimera variegation patterns that we find is one in which the outer edges of the leaves are white or yellow while the interior of the leaf surface is green. When this happens, it is likely that the LII or second layer of cells is completely converted to those mutated to be lacking in chlorophyll. The LI or outside layer still contains chlorophyll and is still green, but the epidermis is not present around the outer edges of a leaf leaving the colorless LII layer exposed there but covered by green LI cells in the middle of the leaf. Because the entire LII layer consists of mutated cells, we expect the pattern to be stable and new growth from this stem to continue to show very similar variegation around the leaf edges. Propagations by stem cutting should carry the variegation as well. In cases where the LI or epidermis layer is completely mutated, we’d expect the leaf to be a normal green around the edges where the epidermis is not present, and a lighter green toward the middle as the green LII layer shows through the white epidermis in the center of the leaf surface.

Mericlinal Chimera variegation is inherently unstable and usually changes in new growth over time. Mericlinal Chimeras can develop into Periclinal Chimeras. Mericlinal Chimeras start with a single cell mutation. As that cell divides, it creates colorless copies of itself. The difficulty is that the green cells next to it are also creating copies of themselves. As the two types of cells divide and jostle for space, the mutated cells may get pushed to the side or may get replaced completely if they are out-paced by the green cells dividing. Since only a portion of the meristem is affected and the balance of green to colorless cells is in constant flux (until one wins out entirely), each new leaf or new branch may contain different levels of variegation and may eventually loose variegation altogether. Many gardeners will trim away any new growth that shows little or no variegation. Branches without variegation have more chlorophyll to produce energy so they tend to outgrow variegated shoots if left in place.

If the mutated cells are found in all three layers LI, LII, and LIII, then it is called a sectorial chimera because only a section is affected. Since the mutated cells of the LI, LII and LIII are each competing with the unmutated cells in their own layer, the variegated area may have different levels of green depending upon which layer or layers are affected in a particular region. Typically, a sectorial chimera will have areas of normal green, and then areas of lighter green surrounding a completely non green area. The lightest area shows where all three layers lack chlorophyll. The lighter green shows when one or more of the layers still has chlorophyll but is stacked with one or more layers that does not. The normal green areas are the portions where the cells are all unmutated cells with chlorophyll. Philodendron brasil is a classic example of a sectorial chimera. 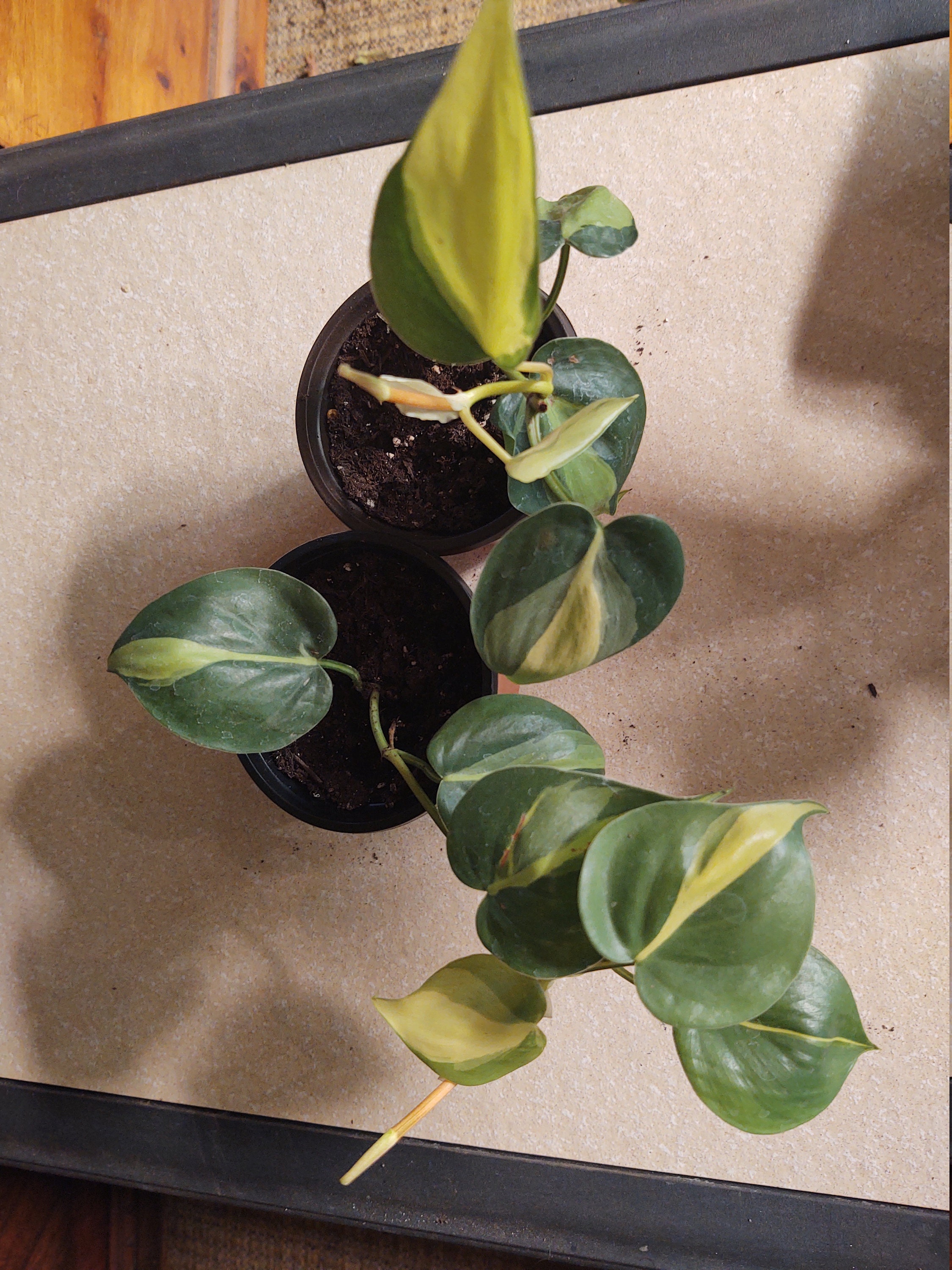 As we discussed, Chimera-type variegation can change or disappear over time as the ratio of mutated cells to non-mutated cells in the meristem changes. If the plant is healthy, in a good environment with plenty of light and nutrients, then the mutated cells have nearly equal rate of reproducing as the green cells. When things get tough however, cells with their own chlorophyll to produce energy have an advantage. They’ll have higher energy as they take what they need before sending the excess to the rest of the plant. Low light, therefore, can promote the loss of variegation in chimera-type plants. Once the colorless cells are gone, they are gone forever, and you’ll have an unvariegated plant. If conditions are restored and there’s lots of energy flowing through the plant again before all the variegated cells are gone, then they’ll once again be on equal footing and the variegation can be preserved. This loss of variegation generally does not occur in periclinal chimeras since all the cells in one of the layers are mutated and there are no green cells left to compete with in that layer. Even with good conditions, sectorial and mericlinal chimeras may lose variegation since the ratio of green to non-green cells is in a state of constant change and may trend to one favor one side or the other even to the point where one type of cell is lost entirely. By trimming branches with lesser variegation and encouraging growth of more highly variegated branches, you can tip the scales somewhat in favor of variegation. Just remember that the plant does need sufficient areas of green for photosynthesis which only occurs in the cells with chlorophyll.

Previous Post Should I Buy Plants to Clean the Air in my Home?
0 items in your cart